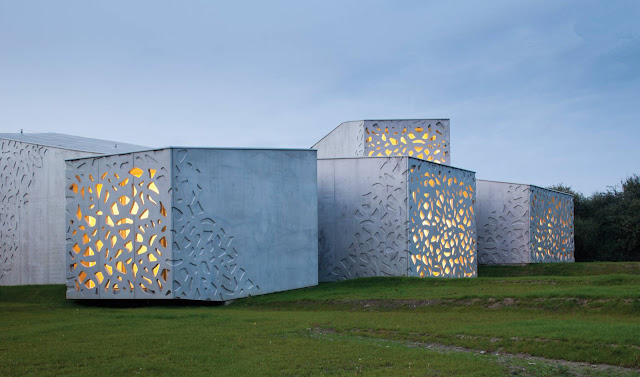 Originally designed by Roland Simounet and inaugurated in 1983, the Lille Métropole Museum of Modern Art (LAM) , which stands in a magnificent park at Villeneuve d’Ascq, has now been extended by Manuelle Gautrand. 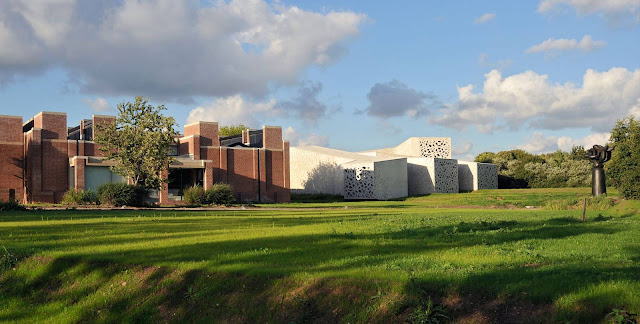 The main aim of the brief was to reconstitute a continuous and fluid museum space, this while adding new galleries in a travelling progression to the existing galleries, to house a superb collection of Art brut works. It also entailed a thorough restructuring of the existing buildings, certain parts of which needed to be redefined. 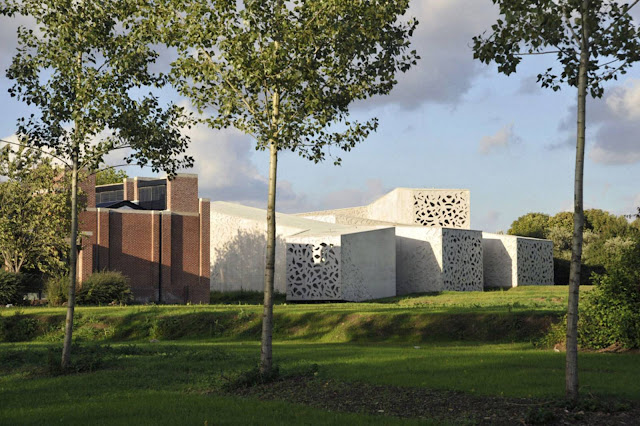 “In spite of the heritage monument status of Simounet’s construction, rather than set up at a distance, we immediately opted to seek contact by which the extension would embrace the existing buildings in a supporting movement. I tried to take my cue from Roland Simounet’s architecture, ‘to learn to understand’, so as to be able to develop a project that does not mark aloofness, an attitude that might have been seen as indifference”, says the architect. 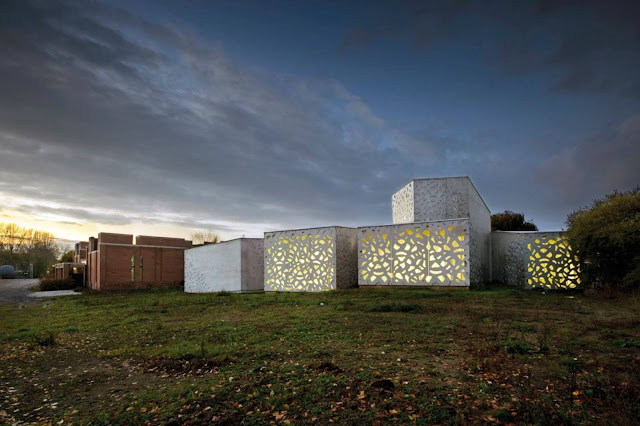 Rather than install the new parts at a distance, the architects chose to wrap the extension around a corner of the ‘old’ building. The project aims at reconstituting the museum as a continuous ensemble, this by adding new galleries to house a collection of Art Brut works in a travelling movement that extrapolates existing spaces. The architecture of the extension wraps around the north and east ends of the angular brick building in a double splay of long volumes that are fluid and organic. 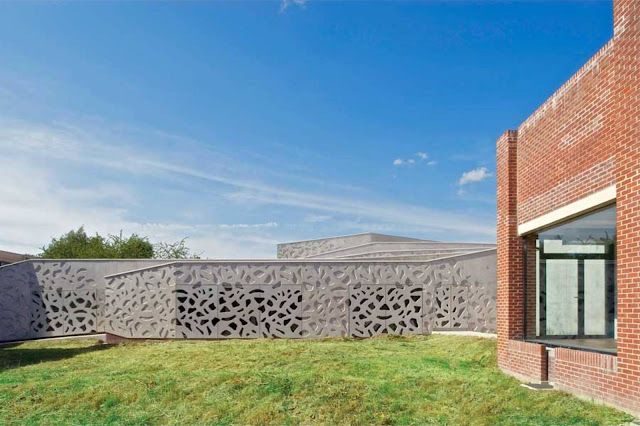 On one hand the new wing develops in narrow folds to contain a restaurant opening onto a central patio, on the other it extends in larger folds, each of which houses one of the five Art Brut galleries. Each fold opens at its extremity to a wide angle view onto parkland, varying the visit itinerary by moments of rest. Envelopes are sober, in plain untreated concrete, with profiles or perforations to protect large openings from too much direct sunlight. 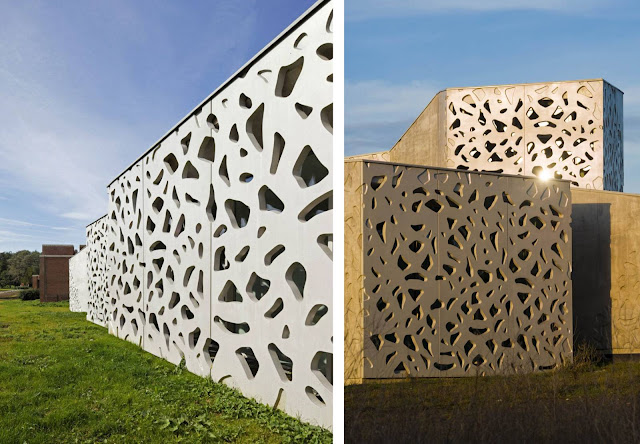 “Our intention was never to compete with Simounet’s design, but to attempt to extend it to achieve our objectives with our own sensitivity. Our project keeps to the same scales in volumes, and uses the same principles to hug the ground line, but we interpret them freely. Thanks to the space available, while working with the programme constraints we were able to create ‘a small world apart’ in the extension.” 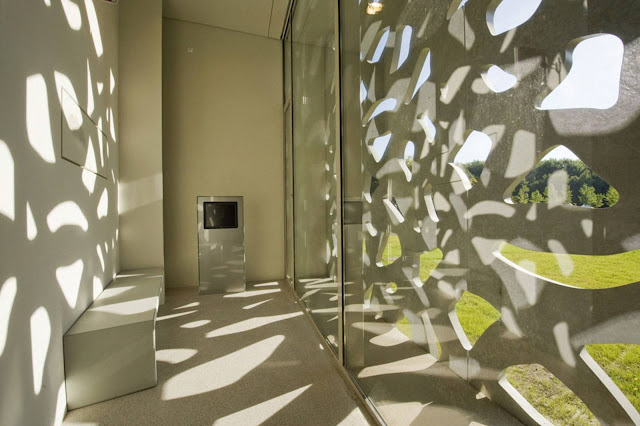 Its outline, which reminds you of a fan or an open hand, enables careful insertion in the contour lines of the site, so the buildings seem to emerge from the topography. (In this respect, Simounet himself was in the habit of talking about ‘staying close to the ground line’). On the café-restaurant side, the close folds of the extension enable us to redefine the patio, to loosen up links from the entrance hall towards the restructured spaces: café-restaurant, bookshop and auditorium. The idea was of course to increase the museum’s floor-space, but also to re-balance its functions and to instil new life into certain areas that had become dysfunctional or ill-used in the course of time. 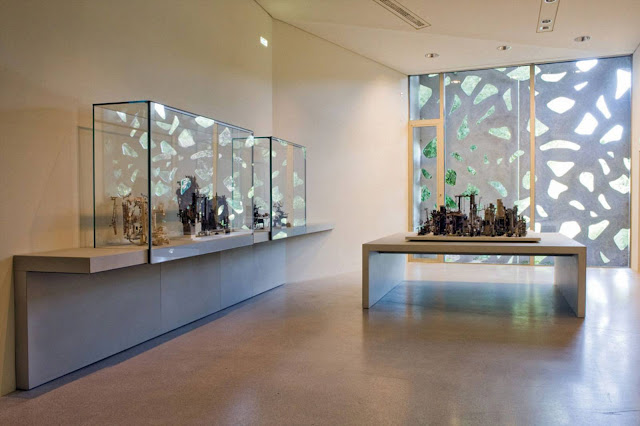 On the other side, the broader folds of the extension house the Art brut galleries. In this part, which is to the east of the existing buildings, all the museum’s galleries are now inter-linked, starting with modern art, passing on to contemporary art, and then on to Art brut, with interspersed theme galleries and temporary show spaces articulated to the others. The Art brut galleries maintain a strong link with the surrounding scenery, but they are also purpose-designed to suit the works that they house: atypical pieces, powerful works that you can’t just glance at in passing. 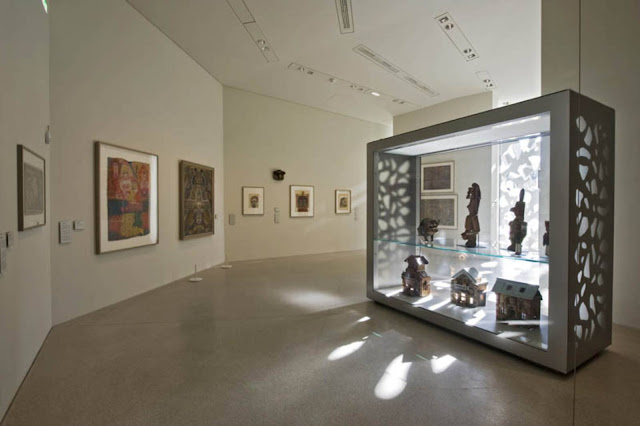 The folds in these galleries make the space less rigid and more organic, so that visitors discover art works in a gradual movement. The architecture is partly introverted, to protect art works that are often fragile and that demand toned down half-light. At the extremity of the folds – meaning the galleries – a large bay opens magnificent views onto the surrounding parkland, adding breathing space to the visit itinerary. 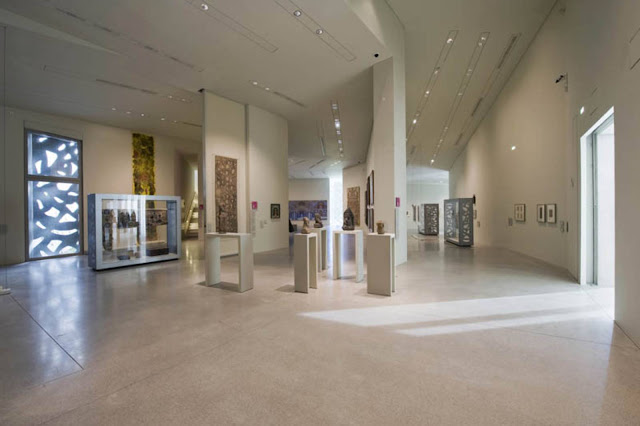 These views compensate the half-light in the galleries: the openwork screens in front of the bays mediate with strong light and parkland scenery, a feature that recalls Simounet’s generous arrangements in the galleries that he designed. Envelopes are sober: smooth untreated concrete, with mouldings and openwork screens to protect the bays from too much daylight. The surface concrete has a slight colour tint that varies according to intensity of light.