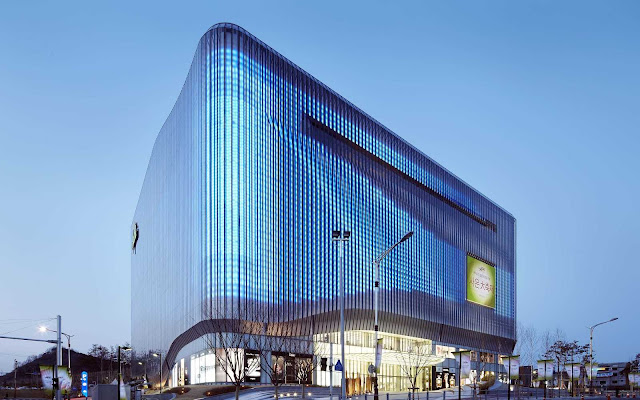 The strategy for the building enclosure consists of creating an optical illusion. The facades feature two layers of customized aluminium extrusion profiles on top of a back layer of composite aluminium cladding. 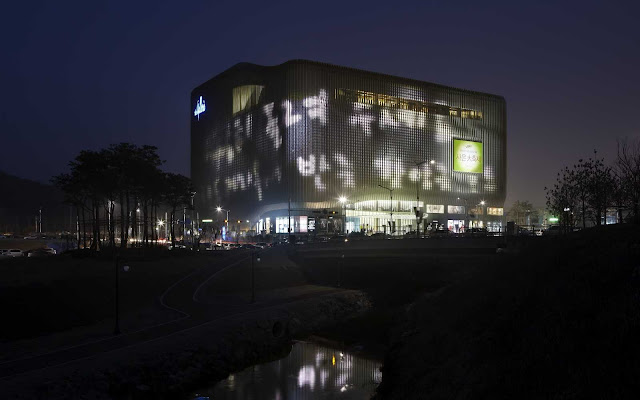 The vertical profiles of the top layer are straight; but those of the back layer are angled. This results in a wave-like appearance, which changes with the viewpoint of the spectator (Moiré effect). 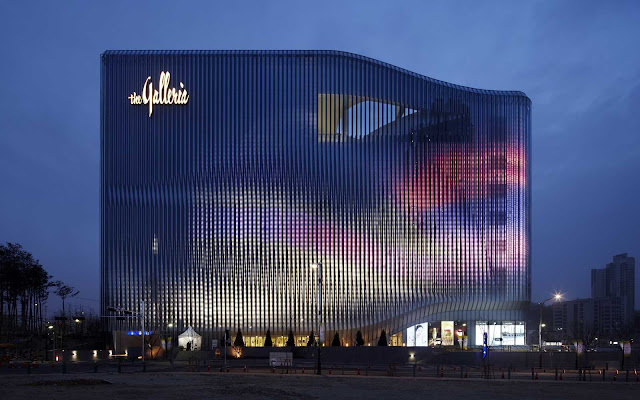 On the facade a gradual transition from exterior surface to the interior plateaus accentuates the internal organisation. The lighting design was developed in parallel with the architecture and capitalizes on the double layered facade structure. 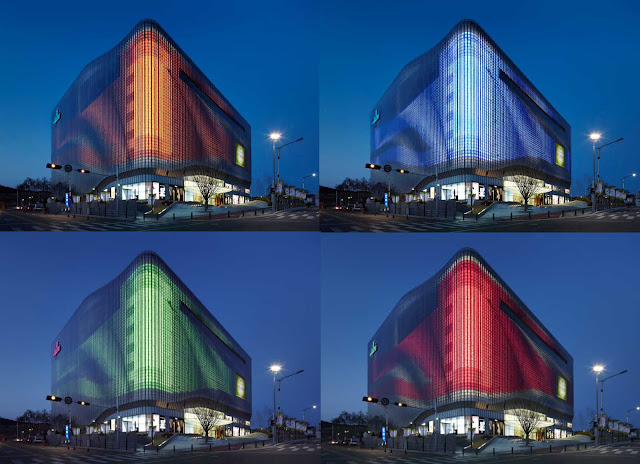 To achieve the large media surface with a minimum of lighting fixtures and light spill, the specially designed and custom produced fixtures are integrated within the mullions of the outer facade layer. Invisible from the outside, these fixtures project light back onto the inner clad facade layer, in-between the vertical mullions. 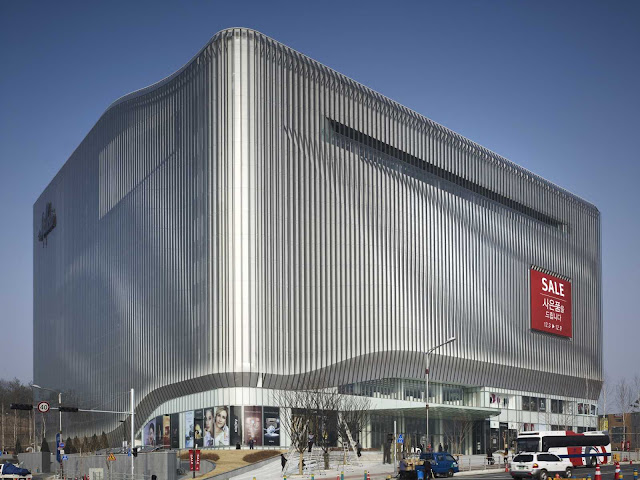 At the corners of the building the low resolution media walls fluidly turn into a high resolution zone, capable of displaying information with more detail. The interior of the Galleria Centercity derives its character from the accumulation of rounded plateaus on long columns. 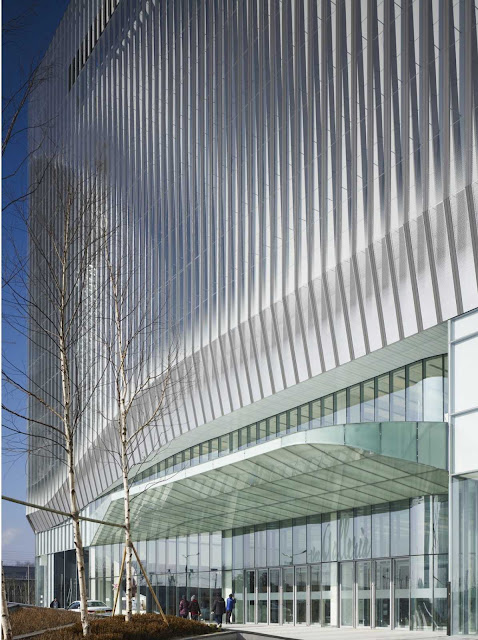 The repetition of curves, enhanced by coiled strip lighting in the ceilings of the platforms, gives the interior its distinctive character. This organisation has been made possible because of the complex spatial arrangement of the atrium. This central void is simple and straight in one cross- section, but oblique and jagged in the opposite cross-section. 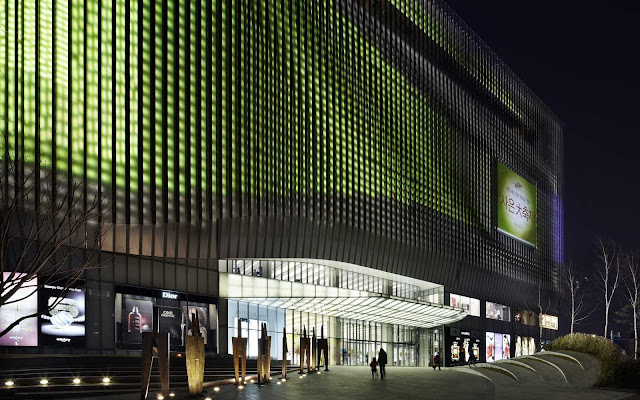 A relatively narrow central void cuts through the volume from top to base, with smaller pockets of space emanating from it. Four stacked programme clusters, each encompassing three storeys and containing public plateaus, are linked to the central void. 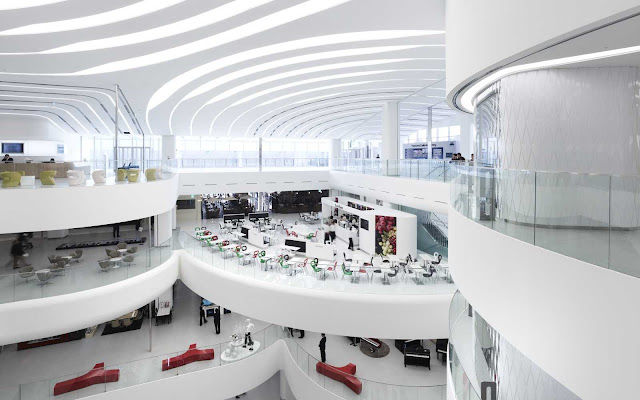 This organisation propels a fluent upstream flow of people through the building, from the ground floor atrium to the roof terrace. Along with the central atrium, the plateaus provide light and views both within the central space and to the exterior. 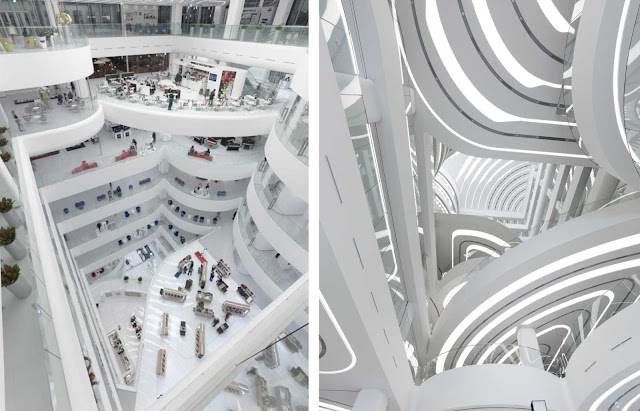 As the plateaus are positioned in a rotational manner in space, they enable the central space to encompass way finding, vertical circulation, orientation and act as main attractor of the department store. UNStudio has designed the interiors of three semi-public spaces in more detail. 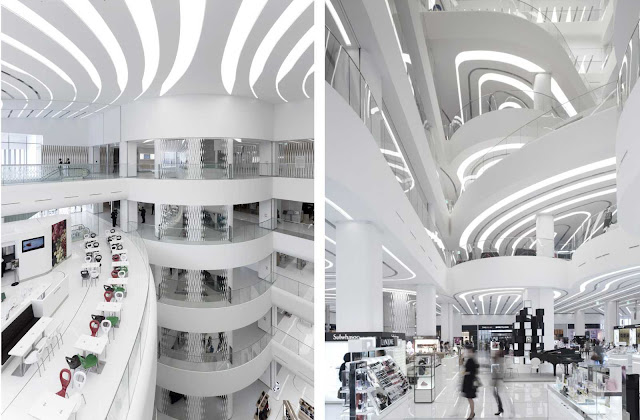 These concern the VIP Room, the art centre, and the customer service areas. The interior design of these spaces encompasses vertical partitions featuring a performative pattern based on the diamond motif, which adapt to the different needs and conditions of the various spaces.