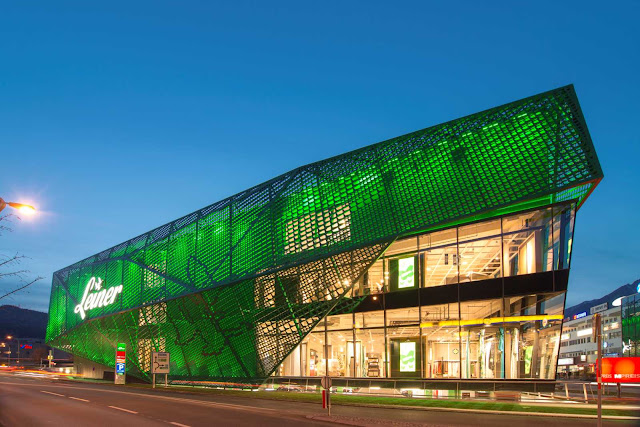 The new Leiner furniture store can be seen from a considerable distance as you approach Innsbruck from the East on the A12 motorway. The four story structure is a beacon, in Leiner’s corporate green, to people passing by. Along with the large areas of green, the angular form of the building itself makes a strong impression. Like a folded tablecloth, the translucent metal construction envelopes the volumes of the building. With this striking facade, Zechner & Zechner are taking a stand against the standardisation and anonymity of current furniture store architecture. 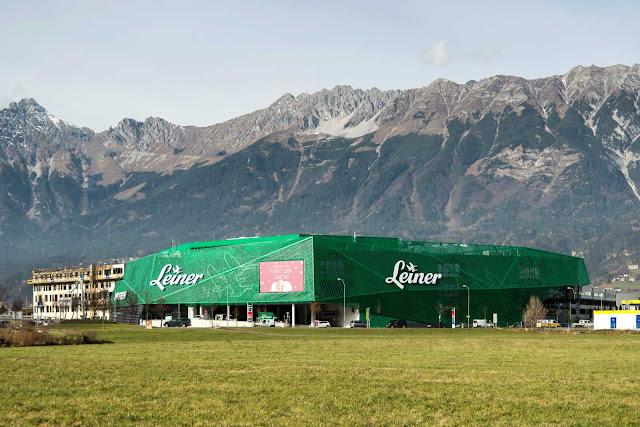 Functional Design
The building consists of four above-ground floors and two below-ground floors. On the ground floor, near the furniture store, there is a branch of the grocery chain MPreis, with a connecting bistro and terrace. The first and second floors are taken up by the furniture retailer’s display space, and on the top floor there is a small restaurant with terrace, from where you can enjoy the view of the surrounding mountains. Storage and admin areas are located on the third floor. 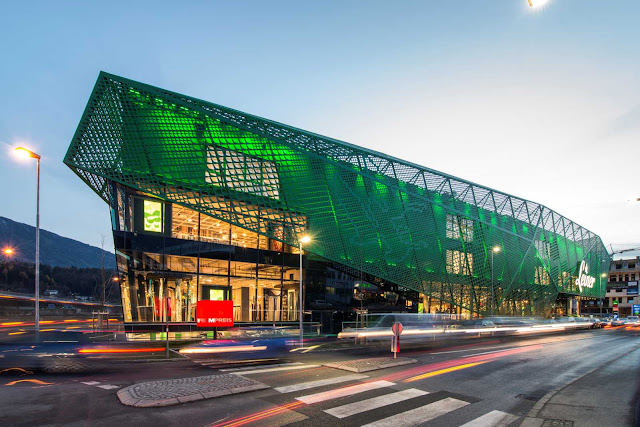 A spiral ramp inside the building connects the display floors, allowing customers to get an overview of the store’s range by just strolling through the building. The two below-ground floors accommodate customer parking as well as various building services areas. The ground floor is slightly raised, by about 1m, from the surrounding ground level, in order to provide natural illumination and ventilation to the underground parking. 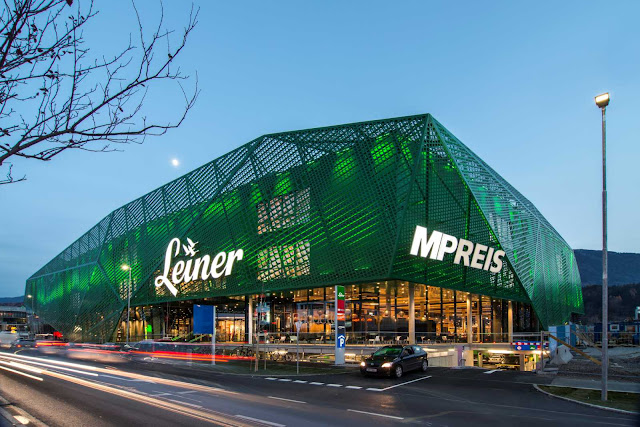 Daylight enters via the gap this creates, which helps prevent the impression of a closed-off and dark garage. To allow the building to be appreciated from all angles, the loading bays for all incoming and outgoing goods have been integrated deep within the building, and as far as technically possible for access, covered by facades. This gives the building the lack of a front or a back, allowing it to be appreciated from all sides. 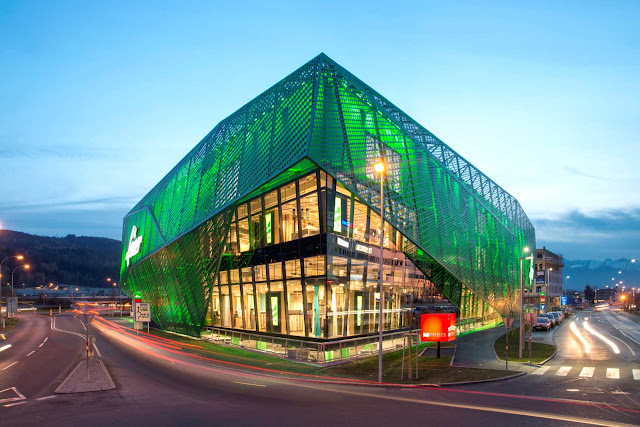 The Facade, a Green Tablecloth with Swan Design
The thermally active facade is predominantly formed of sandwich panels. Display windows are used only in limited areas, including opening the building’s closed skin, at a busy corner on a roundabout, with a two-story glass facade that gives a view of the furniture store’s range. The building will receive another opening in the entrance area and along the side of the grocery market. 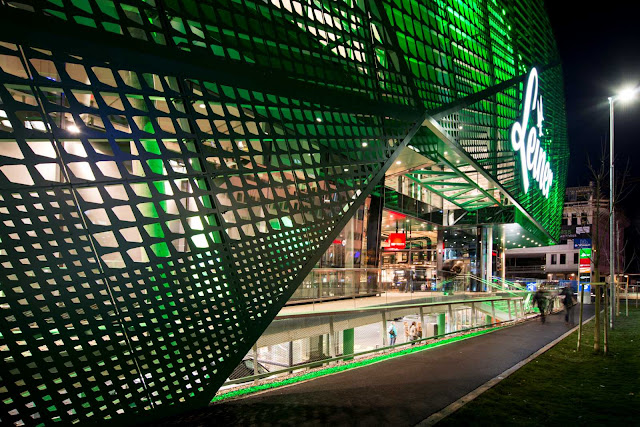 The external shape of the building is, however, primarily created by a suspended projecting facade, which lies like an angular cloth above the geometrically simple structure below. This awakes associations of a tablecloth, a cloak, and of folded packaging. This external skin is ‘pulled up’ in particular areas, such as the glass facades at the roundabout, the MPreis facade and at the entrance area. 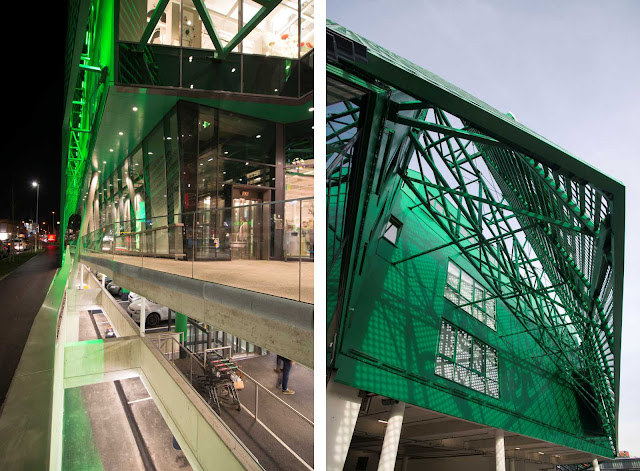 The prismatic facade of perforated aluminium sheets produces different reflections, depending on facade angle, reduces the building’s mass and gives the building a very striking exterior. The furniture retailer’s logo is three swans. From this logo, an abstract perforation pattern was developed for the outer envelope. The perforations are larger where the rooms behind are illuminated by windows, and smaller in other areas to prevent climbing. 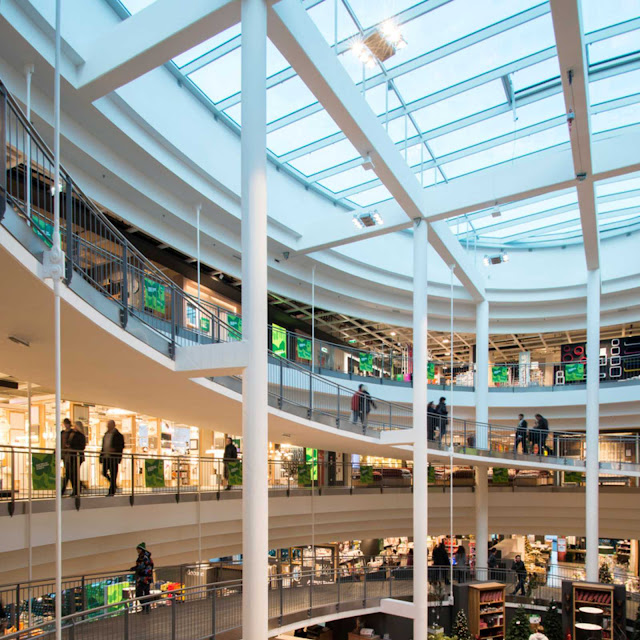 In particular areas the perforations also trace out the three-swan logo. The facade cavity is illuminated in the evening, continually altering the appearance of the building as the lighting changes. The outer envelope then appears lighter and as transparent as a curtain, and the building’s volumes start to light up. 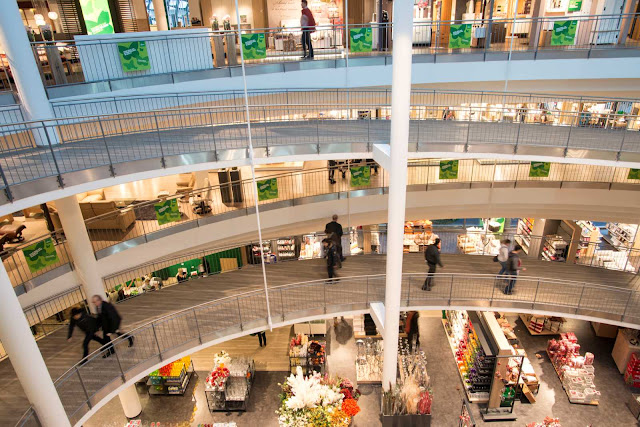 More Energy Efficiency Structure – it doesn’t just look ‘green’
With an investment of around 30M euros for the new Leiner site in Innsbruck, special attention has also been given to energy efficient construction techniques – going well beyond legal requirements. Using innovative building services technology, resources are conserved and energy use and CO2 emissions reduced. 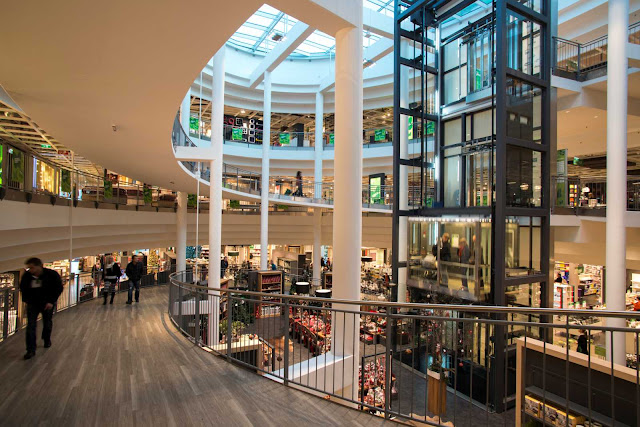 As a comparison: the reductions in CO2 emissions made by the project using innovative building services technology is equivalent to that released by 100 people travelling by car 30,000km a year each. This is the equivalent to 80 average, 150 m2, detached homes with oil heating. 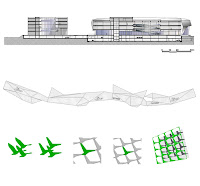 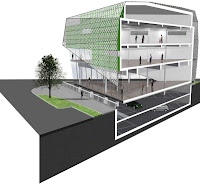