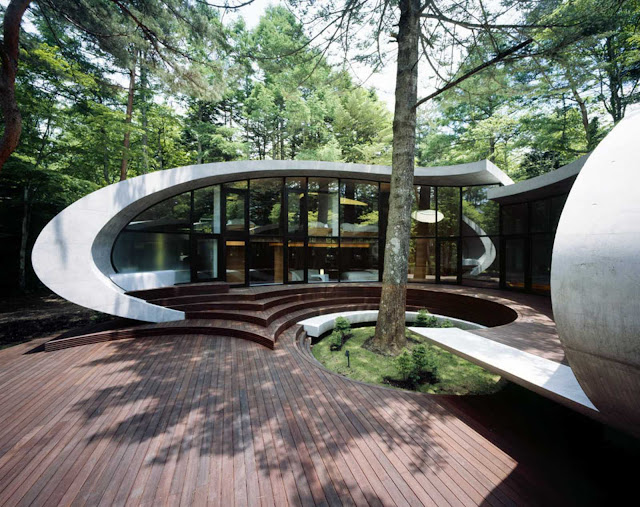 A large shell shaped structure finds itself in the middle of the woods. It is hard to determine what exactly the structure is, and unlike the surrounding caves and rocks, it clearly is not a part of nature – nor is it a ruin. A frame, a shape, made at a completely different place for a completely different purpose. Within this shell shaped structure will one find floors constructed, wall separating spaces, and rooms furnished. 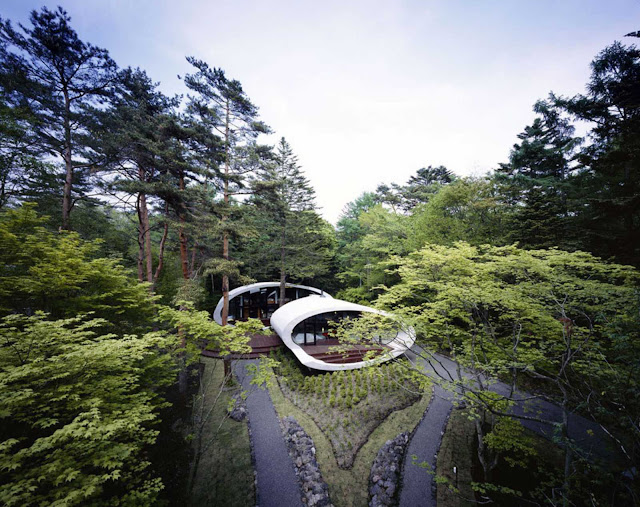 The scenery conjures a SF film-like image, in which locals inhabit over an abandoned spacecraft. With time, trees start to grow encircling the spacecraft, harmonizing it into the landscape. Desiring a place that will be occupied frequently over many years and yet at the same time be in sync with nature, we came up with the aforementioned scenery of a large shell structure floating above ground. Being in sync with nature isn’t about yielding to nature – it’s about coexistence. The existence of the structure depends on its power to endure nature. By isolating living space from the wilderness, and upgrading its quality as a shelter, the house will be protected from nature and will provide a comfortable environment. 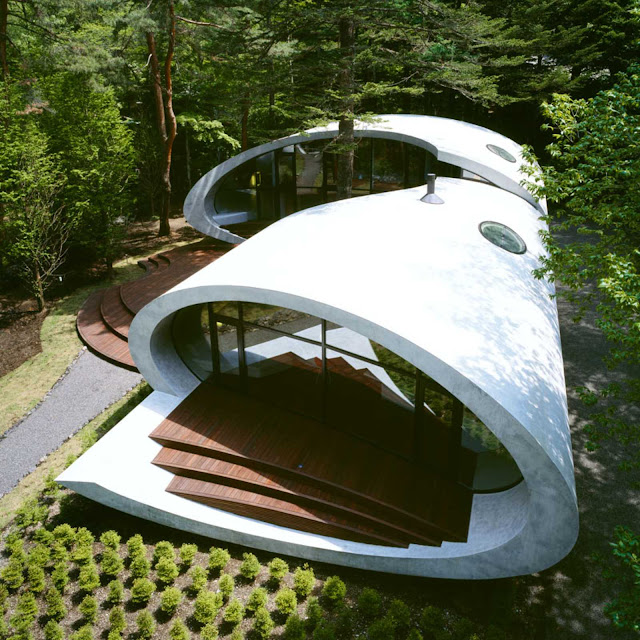 With this, the house will be taken care of and used frequently and continuously. Specifically in cases of villas, frequent use is what leads it to blend in with its surroundings. The regions’ low temperatures and high humidity level makes for a harsh climate. As a result, many houses that take on traditional structures are decaying. Is it in sync with nature? Perhaps. But the whole idea of comfort seems to be put into question. Consequently, large numbers of villas have not been in use for many years bringing them down to further dilapidation. Despite the general avoidance of concrete material in the region, its usage and the lifting structure have helped the villa protect itself from the humidity. Leaving the boundary between human life and nature ambiguous is a Japanese virtue. 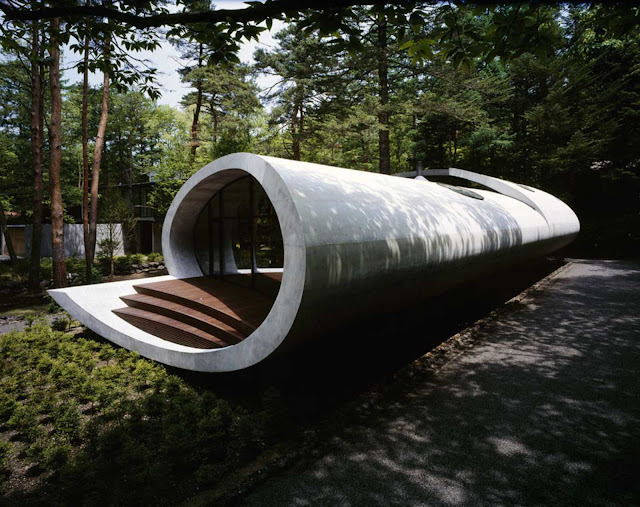 Yet, this ideal can only be achieved through meticulous attention and care of the wilderness on a daily basis. This might be attainable at our homes, but isn’t a practical theory when applied to villas. If a visit to the villa inevitably leads to hours and days of maintenance, why bother going? It clearly goes against the purpose of a villa. Having a type of living space that merges with nature could be appealing, but it only seems natural to consider this option only when one is ready to devote a large time solely on maintenance. It goes without saying that villas should not only be functional spaces for the weekend. Their greatest goal is to provide us with good rest, leisure, and picturesque views that never become dull – all in the vicinity of nature. In the style of many modern sculptures, we aimed to enhance the surrounding nature by incorporating it within the spatial structure. 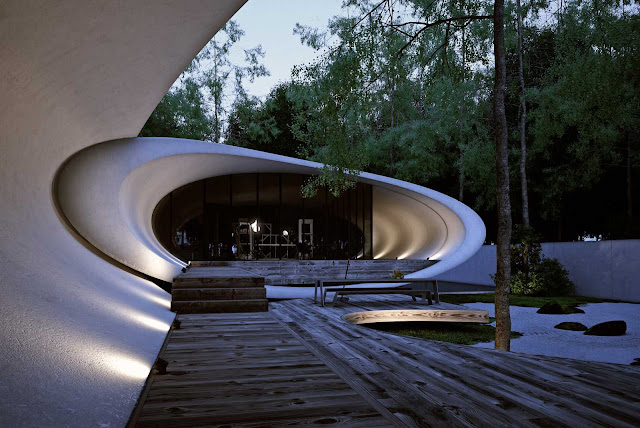 For the house to be actually used, we paid the ultimate attention to its comfort and performance level. With its classic status as a summer resort, many old villas in Karuizawa take on traditional styles, from the time when visitors arrived with the intention of staying for at least a month. Little did it matter that a day or two had to be spent on maintaining the house, given the long sojourn. With the advent of the Shinkansen, the high-speed railways, Karuizawa is merely an hour and 10 minutes away from Tokyo – visiting Karuizawa just for the weekend has become a norm today. A shorter visit calls for a shorter duration of maintenance. The central control system enables all mechanical and electrical equipments to be managed by three buttons. In addition, the biometrics lockage and security system will reduce anxiety and stress over house safety management. The instalment of the custom made floor-heating system minimizes the use of heat energy for avoiding the trouble of emptying drainage in cold regions. Furthermore, it is highly effective in mold prevention. In addition, it works as a cold-draft blocking system which enables the luxury of enjoying a hefty amount of space with large openings. The system integrates itself within the architectural form. Assuming future interior and equipment maintenances (including the window sash) for continual use, the frame is completely separate. The building frame is assumed to assimilate with its surroundings with the passage of time. To provide efficiency during maintenance, the concrete was exposed, finished with a penetrative sealer for concretes. 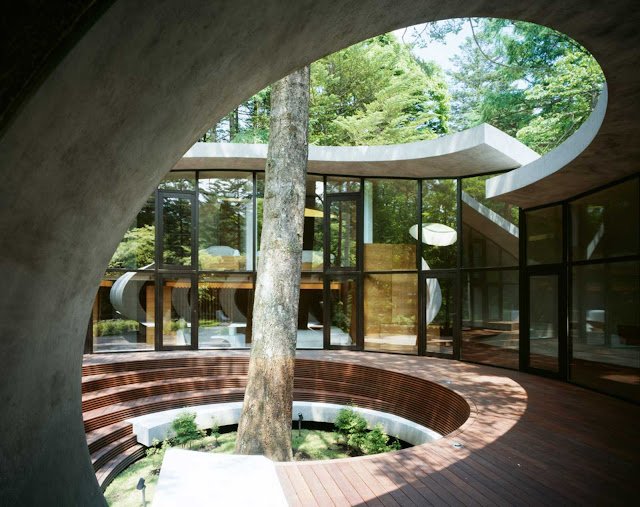 The plan was to build the villa around the big fir tree as the center of the site, with a row of pine trees as the main view. Initially, we had planned to build a shell structure with three dimensionally curved surfaces, and the C shaped section was to surround the fir tree and the plan of the building resembled the letter J In addition, certain parts were planned to hold double volume space. Yet, going over the budget, construction method and finish, the plan was revised down to a shell structure of two dimensionally curved surfaces. The J shaped structure is constructed by two different size oval cylindrical masses cut with curves. The straight part of J, a smaller mass connects to a curved part to J, a larger mass. The top of the oval shaped building wall thickens by 350mm and its width continuously increases up to 750mm at both sides to meet the structural requirements. 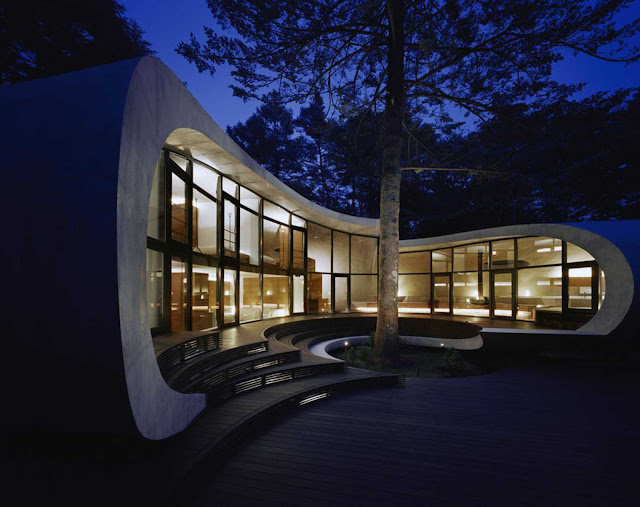 The free-curved lines appear on the edge, and the three dimensionally curved surface with a twist partly appears on the cut surfaces. However the entire structure was composed by two dimensionally curved surfaces. The floor is built 1400mm above the ground, with the lower half of the shell structure protruding greatly towards the outside, supporting the terrace of the same height. All air and exhaust outlets are installed beneath the sash, letting air run outside through the terrace louver. In addition, by devising unfixed windows, we tried to maximize natural ventilation (we haven’t arranged air conditioning in general parts). While at a glance, the oval shaped cylinder space might appear as wasteful use of space, the functional use of space is maximized by the installation of furniture in the lower half of the oval cylinder. 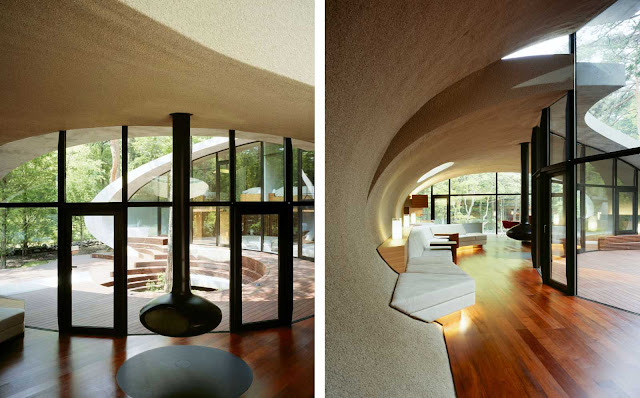 Considering the often short and intermittent use of villas, the expanded hard urethane form has been installed to cover 60 mm of the interior wall of the oval cylinder, which will reduce thermal capacity. As for the interior finishing touch and for adding surface strength, synthetic resin with vermiculite material sprayed directly on the urethane form surface was the choice. Often the type of finish seen on the back of panels, it is efficient in preventing fire, absorbing sound, and insulating heat and moisture. As previously mentioned, the warm air in-floor heating system has been installed. By dividing the oval section with a flat floor, a bow shaped space will appear on the bottom of the oval, which will serve as a heat chamber and be filled with pipes. 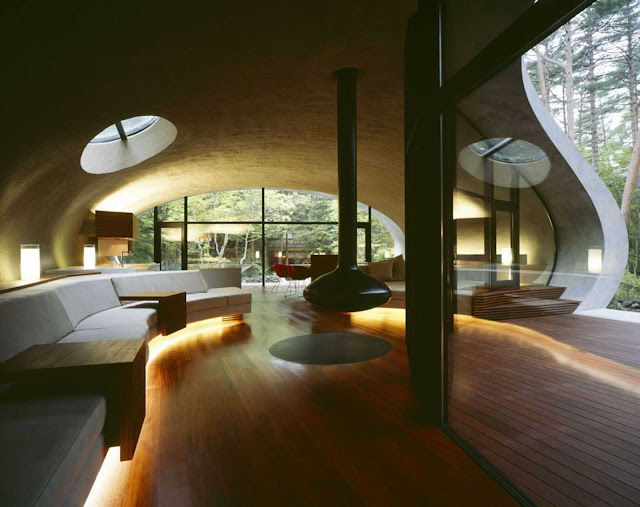 Warm air that blows from locations of frequent use will efficiently heat the flooring. Eventually, the warm air will also be released through slit instalments by the window, preventing cold drafts. At times of absence, if the temperature drops to freezing point, an automatic system installed beneath the flooring will run its antifreeze procedure. Since the system first heats the plumbing space, and as a result, the antifreeze procedure is run by dramatically reduced energy. The system was further customized by adding a dehumidification and ventilation drive, which runs by automatic operation throughout the year. The efficiency of this system is truly remarkable.