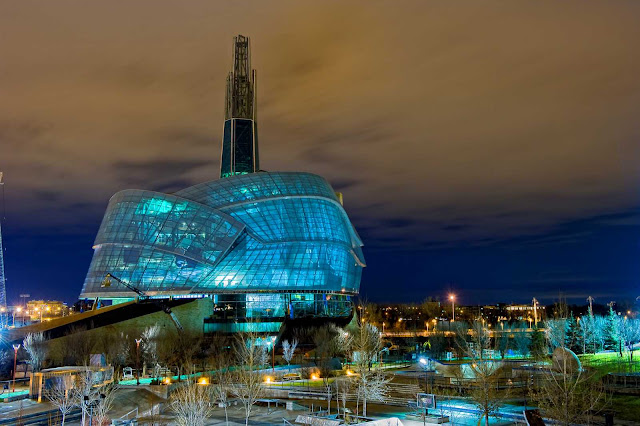 The Canadian Museum for Human Rights is rooted in humanity, making visible in the architecture the fundamental commonality of humankind-a symbolic apparition of ice, clouds and stone set in a field of sweet grass.

Carved into the earth and dissolving into the sky on the Winnipeg horizon, the abstract ephemeral wings of a white dove embrace a mythic stone mountain of 450 million year old Tyndall limestone in the creation of a unifying and timeless landmark for all nations and cultures of the world. 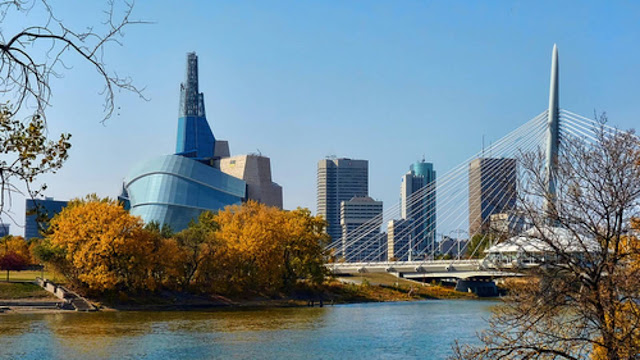 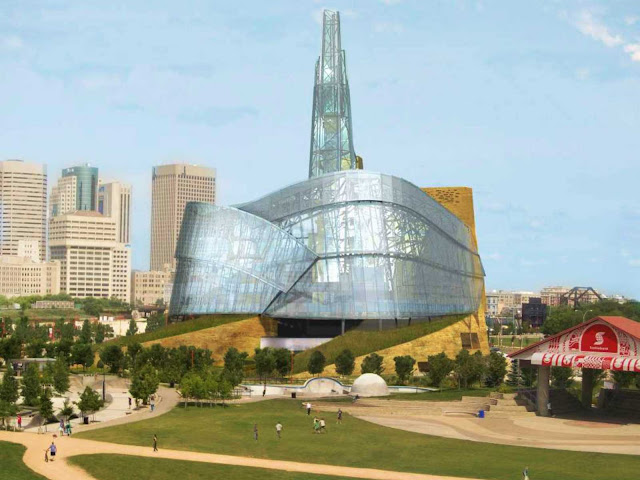 Clutching the earth, the roots are calibrated to block northern and northwestern winds and celebrate the sun, with apertures marking paths of equinox and solstice. Containing the essential public interface functions of the museum, the Roots create a framework for ceremonial outdoor events with roof terraces and amphitheater seating. 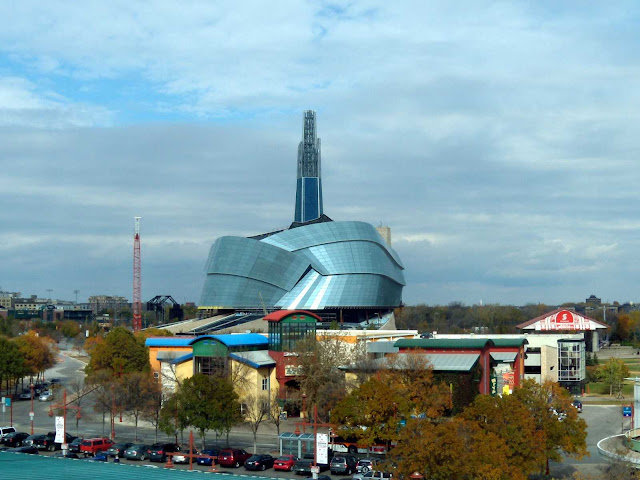 The journey begins with a descent into the earth, a symbolic recognition of the earth as the spiritual center for many indigenous cultures. Arriving at the heart of the building, the Great Hall. 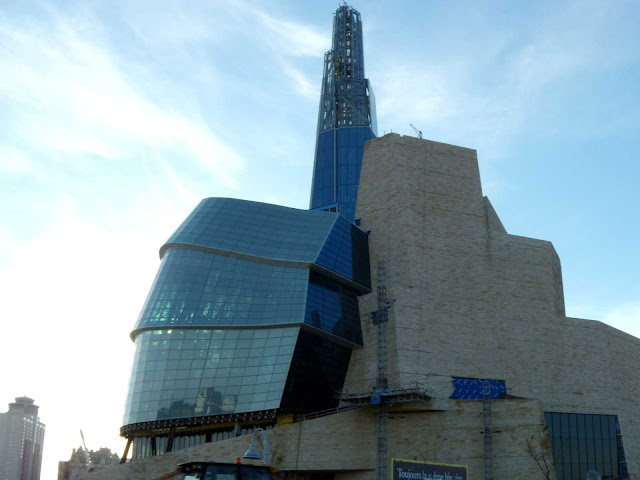 Carved from the earth, the archaeologically rich void of the Great Hall evokes the memory of ancient gatherings at the Forks of First Nations peoples, and later, settlers and immigrants. Like a mirage within the Museum, the Garden of Contemplation is Winnipeg’s Winter Garden. 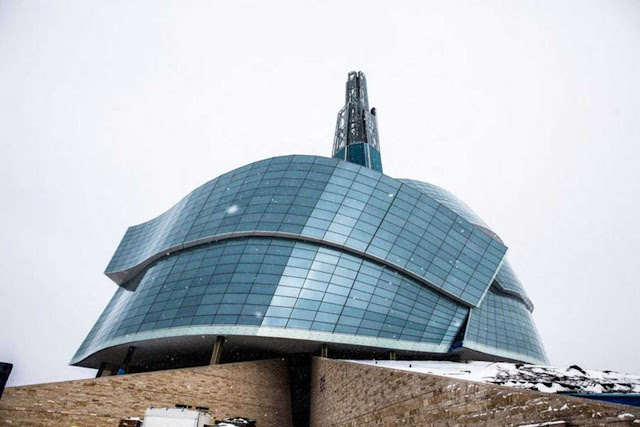 Basalt columns emerge from the top surface of the timeless granite monolith. Water and medicinal plants define space and suggest content. The First Nations sacred relationship to water is honored, as a place of healing and solace amidst reflections of earth and sky. 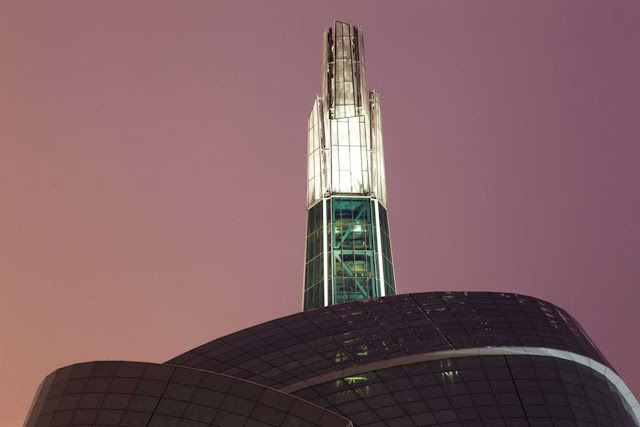 The space of the Garden functions as a purifying “lung” reinforcing the fundamental environmental ethic, which grounds the building. The journey culminates in an ascent of the Tower of Hope, with controlled view release to panoramic views of sky, city and the natural realm. 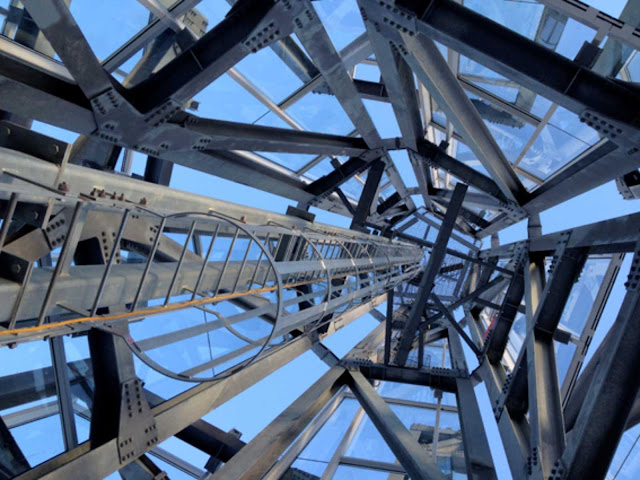 Glacial in its timelessness, the Tower of Hope is a beacon for humanity. Symbolic of changes in the physical state of water, material and form, it speaks to the life affirming hope for positive changes in humanity. 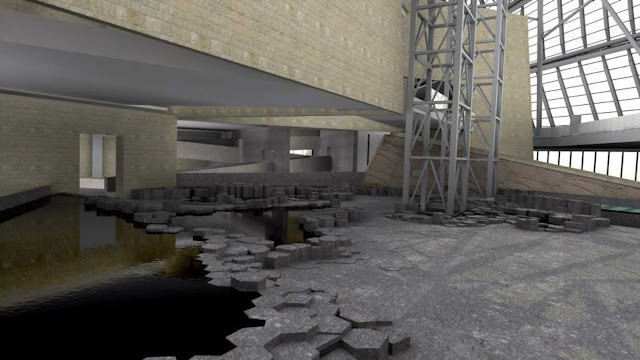 An allusion to the vaporous state of water, the Cloud, houses the functional support of the Museum. With strong overlaps to the visitor experience, the cloud is envisioned as light filled and buoyant, in marked contrast to the geologic evocation of the Roots and Stone Galleries, providing a visible reminder from the exterior, in tandem with the Tower, of the power and necessity of hope and tolerance. 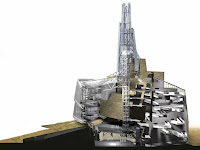