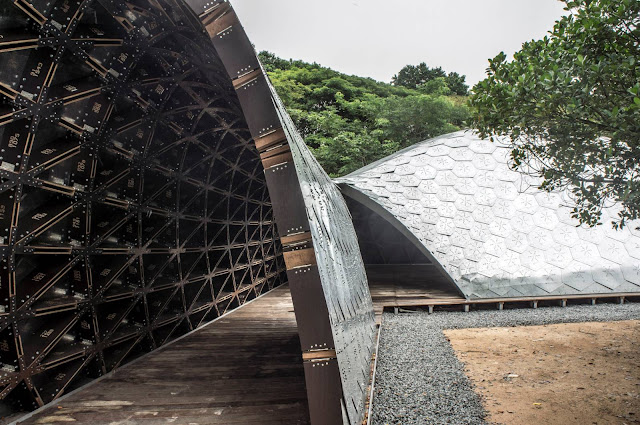 The Singapore University of Technology and Design (SUTD) library pavilion is located on a sloping lawn on the temporary Dover Campus. 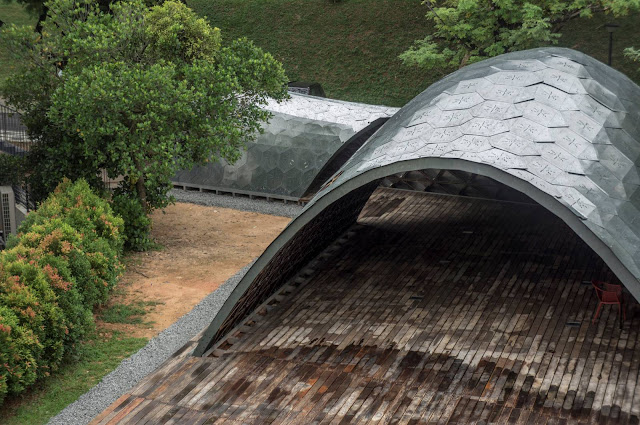 Accommodating three mature trees and forming a noise barrier toward the Ayer Raja Expressway in the north, the gridshell structure of the pavilion harnesses the site constraints and activates an outdoor space behind the existing library building. 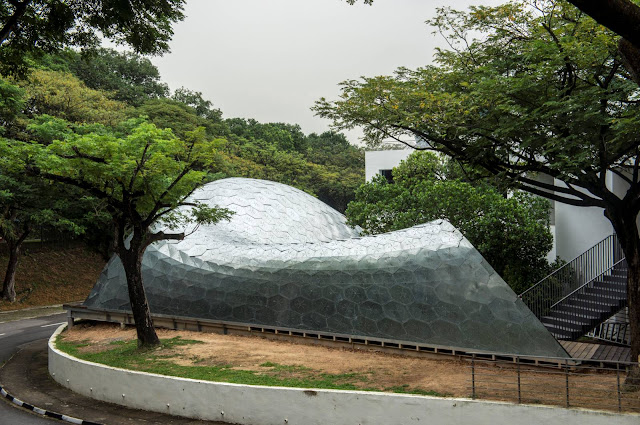 During the day, it offers a shaded open-air place to relax, work, and mingle for students and staff of the university. At night it becomes a place for informal gatherings, evening lectures and SUTD community events. 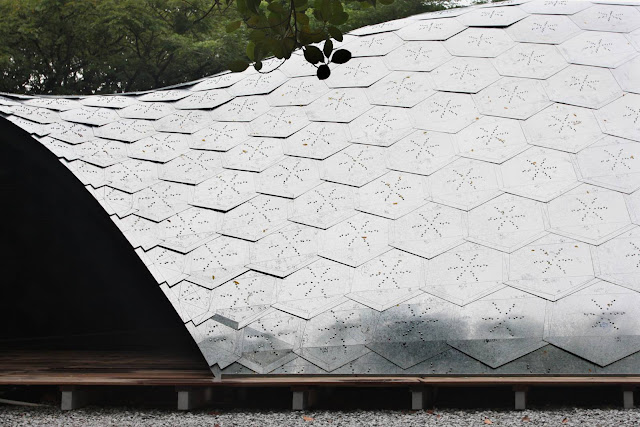 Work desks, mobile bookshelves and wireless internet transform it into a “third space” between the dormitory and the classroom where intellectual and social exchange occurs in a casual atmosphere. 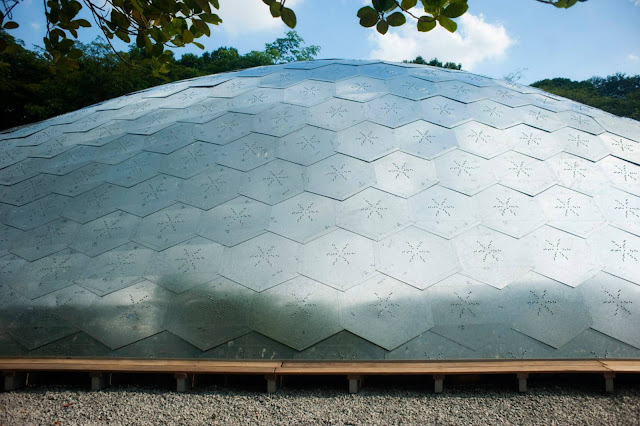 Design & Construction Process:
Building upon a long tradition of catenary structures that use little material to achieve considerable spans, the canopy forms a lightweight timber shell with no columns, beams, or vertical walls. 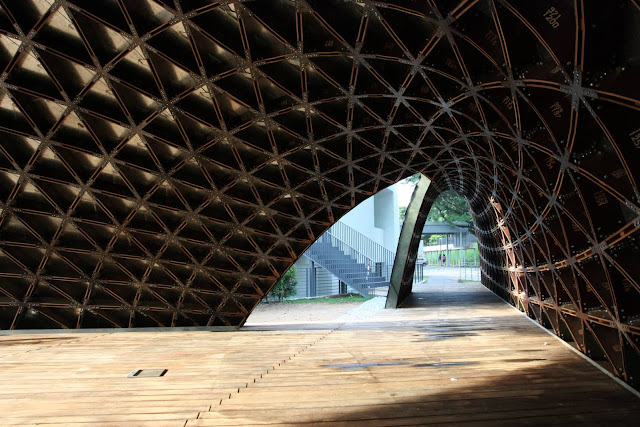 A numeric hanging-chain model was used to determine an efficient double-curvature shape that follows the lines of thrust in compression. 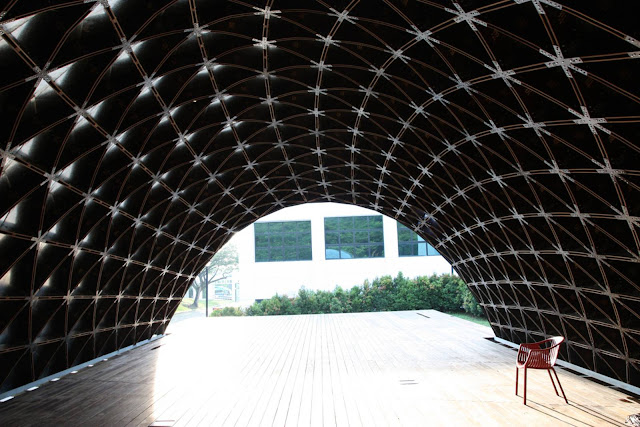 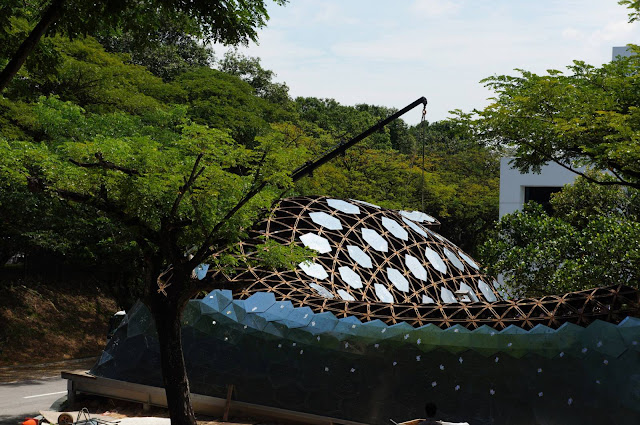 Unlike steel gridshells, it has no complex three-dimensional structural joints – all of its elements were prefabricated from strictly flat plywood and galvanized steel sheets on CNC machines in Singapore. 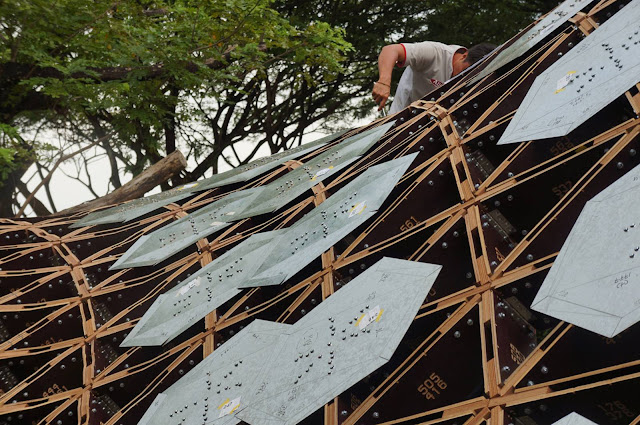 The site work thus comprised an orderly assembly of 3,000 unique plywood and 600 unique sheet-metal tiles based on only one drawing – the numeric map of a three-dimensional puzzle indicating which pieces fit next to which other pieces. 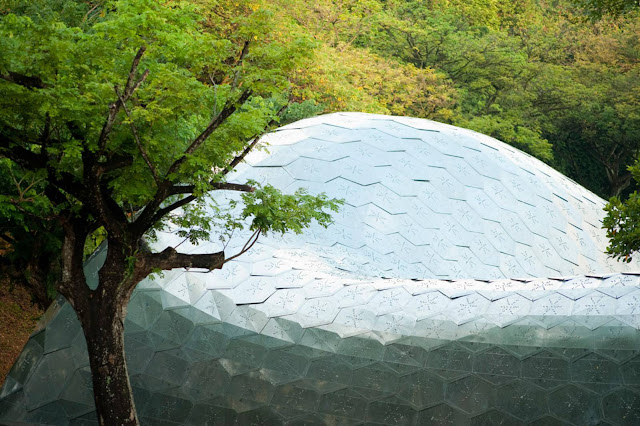 ID numbers were engraved in the cutting process on each plywood and cladding element, which remain visible in the finished structure as ornament. First year SUTD students assisted with the pre-assembly of the pieces and the contractor erected the structure on site. The pavilion is designed to be dismantled and recycled after two years.