Global architecture firm HOK announced that it has completed the acquisition of Kansas City-based 360 Architecture, which has gotten much attention for its design of the retractable-roof Atlanta stadium slated to open in 2017. Other high-profile 360 Architecture projects included the New York Giants’ and Jets’ MetLife Stadium and the ongoing renovation of the Miami Dolphins’ stadium.

“We acquired 360 because we consider them the world’s most innovative designers of stadiums, ballparks, arenas, recreation and wellness centers, and mixed-use entertainment districts,” Patrick MacLeamy, HOK’s chairman and CEO, said in a news release.

“Designed as a signature element rather than a utilitarian cover, the New Atlanta Stadium’s retractable roof provides a radical departure from the kinetic roofs of other sports facilities. Derived from the shape of a falcon’s wing, a reference to the Atlanta Falcons NFL team, the roof features eight triangular panels that wrap the stadium and move in unison along individual tracks.

This allows the roof to open and close like a camera aperture. Exterior lighting can easily change the color of the transparent facade. The stadium interior offers fans an immersive, technology-driven, game-day experience. A wide array of seating options provide fans with varying ticket prices, vantage points, degrees of service and amenities. 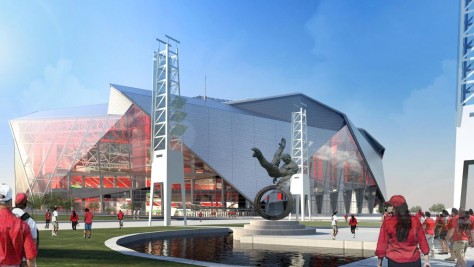 A 360-degree HD halo video board built into the roof offers fans clear views from every seat. Other amenities include a fantasy football lounge, a 100-yard bar and a floor-to-ceiling view of downtown Atlanta. Designed for flexibility, the stadium can be quickly reconfigured to accommodate games for Atlanta’s new Major League Soccer franchise. 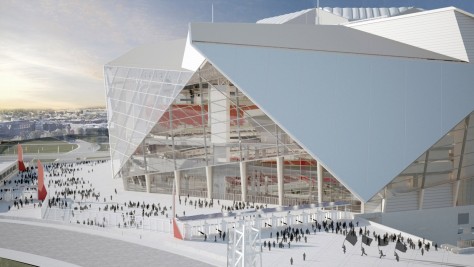 Retractable seats surrounding the field allow fans to get close to the action for both soccer and football. Digital media platforms throughout the stadium offer flexible opportunities for teams and sponsors to display targeted programmable content on game days.

In addition to serving as an anchor for the downtown tourist and entertainment district, the New Atlanta Stadium will catalyze changes in neighborhoods surrounding the stadium. The project team’s focus on sustainable design, construction and operations extends into the community through the creation of urban farming and open recreation spaces.” Source by HOK.