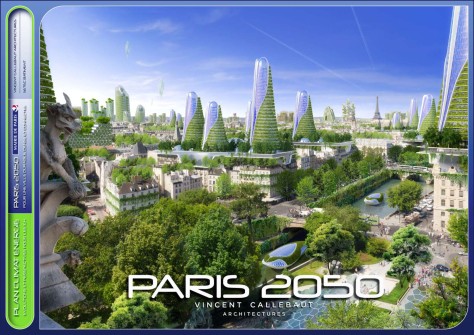 The “2050 PARIS SMART CITY” project is a research and development work on the integration of high-rise buildings with plus-energy (BEPOS) producing by solidarity all together energy for the surrounding areas. In order to fight against the urban heat-island phenomenon by increasing in the same time the density of the city in the long-term, this study presents 8 prototypes of mixed towers. This study has been carried out for Paris City Hall by “Vincent Callebaut Architectures” agency with the green engineering consultant “Setec” in the summer of 2014. The history and the evolution perspective in 2050 of the high-rise buildings in the context of Paris Climate Energy Plan and the 8 plus-energy and/or energetically connected prototypes are presented below: 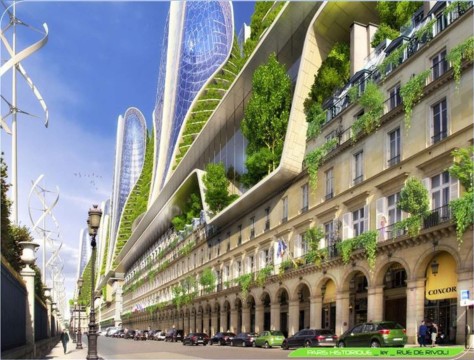 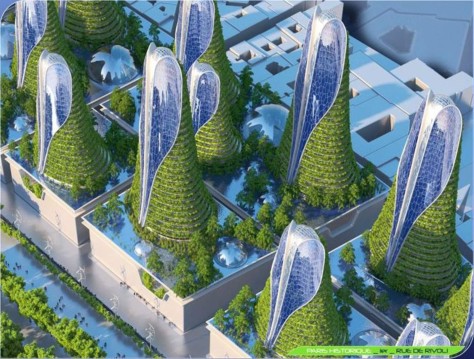 The “Mountain Towers” project aims at controlling smog, making denser and naturalizing thus type of hyper energy and space consuming urbanism by the construction of bioclimatic mountains integratingthe renewable energies on the roofs and in the heart of the blocks. Three types of renewable energies will be available in each tower: During the day, two huge photovoltaic and thermal solar shields bio inspired by the structure finely cut from dragonfly wings will produce electricity and hot sanitary water. At night, a reversible hydro-electrical pumped storage station will let an urban cascade flow out from the top of the tower. Finally, the garden balconies will surround the inhabited storeys and filter in clean recycled waters rejected by the inhabitants by phyto-purification and bio-composting. 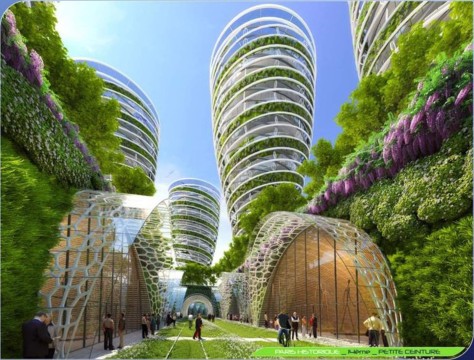 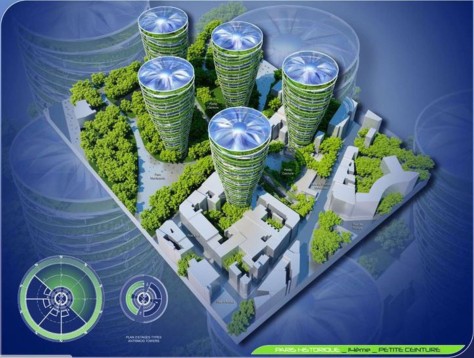 The “Antismog Towers” plan to renaturalize the railway lines into green areas by the integration of community food gardens cultivated by the residents. The cycle paths and the urban vegetable gardens will be implemented vertically around the cyclonic towers depolluting the grounds by hydroponic phyto-purification and filtering the atmospheric smog thanks to their photocatalytic structure in titanium dioxide. Energetically, these towers will produce electricity by the integration of axial wind turbines of Darrieus type in the strengthened facade on the one hand and on the other hanf in photovoltaic flexible textile that enable the rainwater and dew on the roof. Regarding the thermal part, the temperature differential with the tunnels of the Petite Ceinture will be used to create geothermal cooling/heating tubes enabling to bio-air condition passively the surrounding air inside the tower. 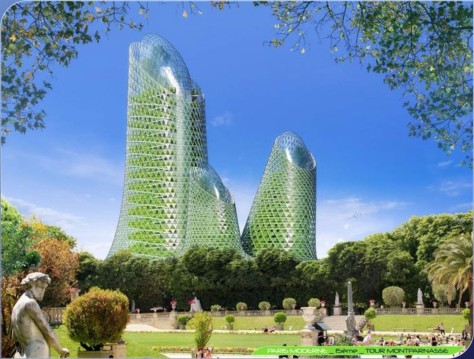 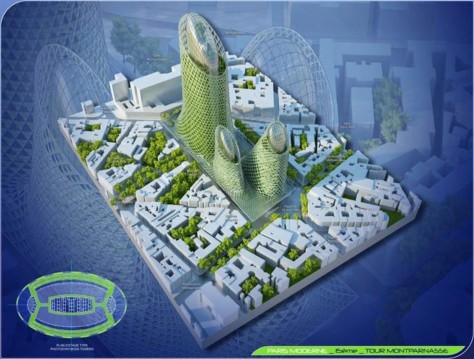 Montparnasse tower will thus be a carbon neutral BEPOS ecosystem without fossil fuels built under the shape of a vertical public park on several floors overhung by sky gardens. The slab-roof of the shopping mall will be transform into a phyto-purification lagoon recycling the used waters of the building. This planted green space in the heart of Paris will cover Montparnasse tower as well as other smaller towers (building C ad Express tower) with an insulating bio-facade that produces biofuel. Green micro algae will be cultivated on curtain-walls in planar and triangular photobioreactors built in laminated glass. They will capture the thermal solar energy by serving in the same time the generation of biomass used to produce methane. The CO2 will be used as nutrients to the algae that proliferate under the solar radiation. 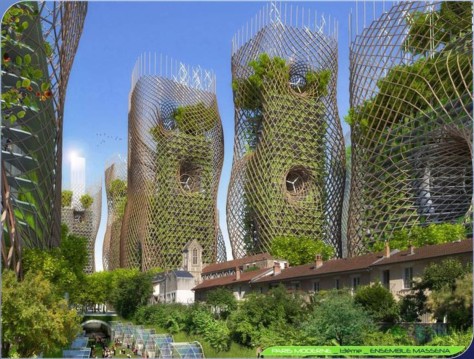 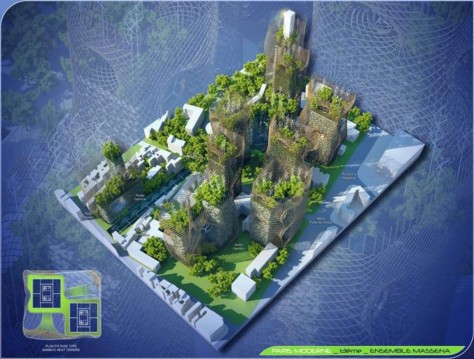 The “Bamboo Nest Towers” project aims at renaturalize the thirteen towers of Massena area built on the grounds of the former Panhard & Levassor plant along the way of the “Petite Ceinture”. Tower Puccini, Palerme, Rimini, Verdi, towers etc. will be enveloped by an ecoskeleton in plaited bamboo. On the one hand, this ecological 3D canvas will enable to support structurally the overload of individual vegetable garden balconies and community orchards surrounding the existing housing. On the other hand, the funnels shaped by the braiding geometry will accentuate the Venturi effect accelerating thus the strength of the prevailing winds to increase the output of the three-blade wind turbines. Besides the bio-air condition of the atmosphere provided mainly by the evapo-perspiration of the plants, and in addition to the electricity generated by the axial wind turbines implanted on the roofs-blade in the funnels, the main energy source will come from the concentrating thermodynamic plant. 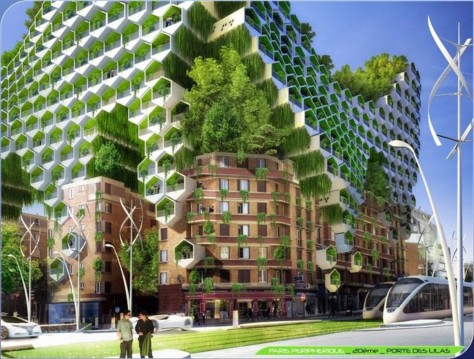 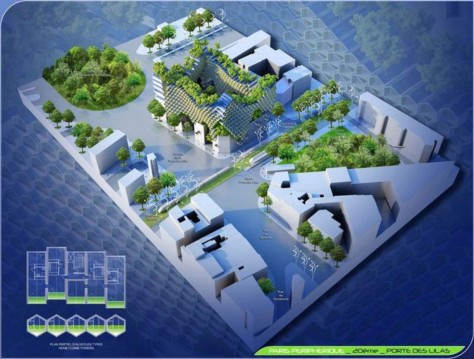 In order to increase the offer of housings in Paris, the “Honeycomb Towers” propose to double the height of theses HBM by an architecture leading to the construction of individual mini-houses interlocked the ones to the others. Such as a honeycomb with hexagonal alcoves, this urban implant will offer to the new inhabitants vegetable gardens and suspended orchards repatriating thus in the city the advantages of a rural individual house. The structure in honeycomb will enable to reinforce the resistance of the tower by assuring maximum lighting. The roofs will be covered by thermal and photovoltaic solar panels whereas the Sérurier and Mortier boulevards, the Phylolights (hybridization of a lamp and an axial wind turbine) will assure the public lighting self-sufficiently. 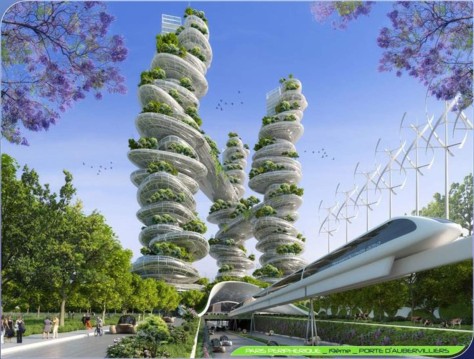 FARMSCRAPERS TOWERS: PERIPHERAL PARIS _ 19th district, PORTE D’AUBERVILLIERS
A vertical farm repatriating the countryside in the heart of the city. 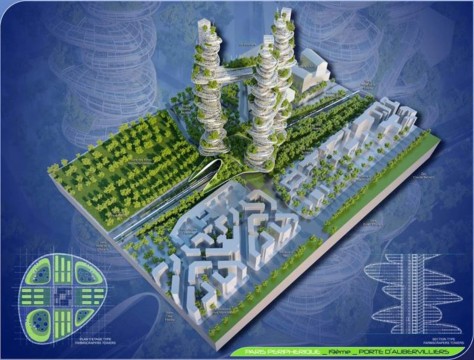 The “Farmscrapers Towers” concept aims at articulating the Claude Bernard urban development zone and its linear forest with the new master plan of Aubervilliers. As urban articulation of ecological corridors, the three vegetable towers implanted on a urban forest in the shape of a huge manta ray. The objective is to repatriate the countryside in the heart of the city and to reintegrate the food production locally. True city district piling up mixed blocks, these Farmscrapers make denser the urban space by optimizing the quality of life of the inhabitants by the reduction of the transport means, the implantation of a domotic network, the renaturalization of the public and private spaces and the integration of clean renewable energies as the biomass, the methanisation, the photovoltaic and thermal solar energy and the wind turbines. 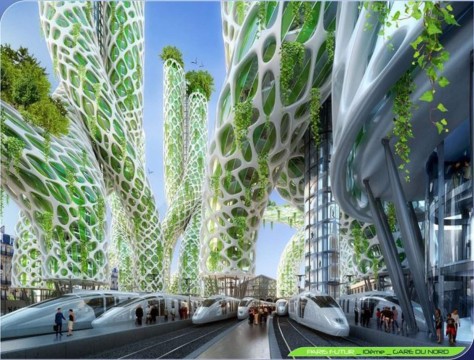 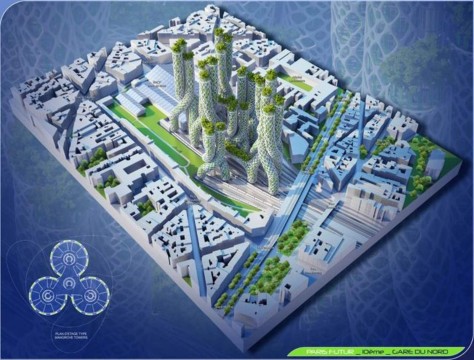 The “Mangrove Towers” will be inspired by the mangrove trees of the maritime marshes with their pneumatophores and their stilt roots. They will be implanted directly of the platforms of the Gare du Nord and they will ramify each other as ecosystem resilient to the climate imbalance. These towers will accommodate a mixed programme of offices, hotels and housing dedicated to international and traveling customers. The project will be eco-designed from state-of-the-art renewable energies to present a zero carbon footprint. Indeed, the station platforms will be full of piezoelectrical captors polarizing under the action of the mechanical constraint generated by the travelers. The tubular facades will be composed of Grätzel cells forming a photo-electrochemical skin inspired by the light (photons), will also produce the electricity by electrolysis. Finally, the towers will not only be self-sufficient in energy but they will be also depolluting thanks to their structure in titanium dioxide. 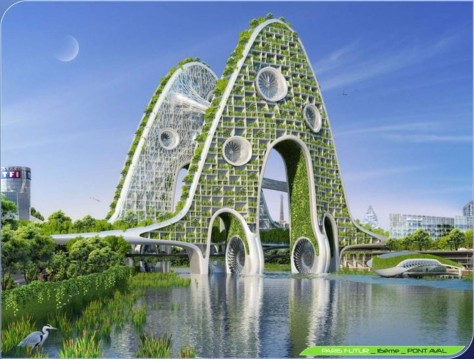 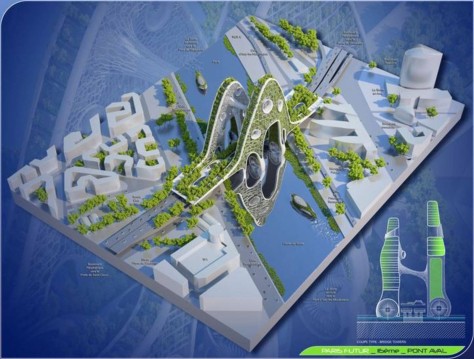 Inhabited planted amphibian bridges across the Seine river upstream and downstream of Paris. With the objective of making the city denser by inhabited vertical ecosystems, the “Bridge Towers” project proposed the construction of two green bridges at the river gates of Paris. These two bridges with jellyfish silhouettes emerging from the water will link the 15th and the 16th arrondissements in the west to the 12th and 13th district in the east. They will be twin towers molding and re-customizing extraordinarily both existing bridges of the ring road in order to enhance both entrances to the city by the river along which its history flew from Lutece. True urban link, this bridge, until here passage between two banks, will be a new territory created by a new urban form linking two towers of more than 200 meters.