KriskaDECOR becomes one of the protagonists at the 2015 Milan Universal Exposition thanks to its participation in covering the Ecuador pavilion.

An architectonic work designed by Zorrozua y Asociados that evokes the concept of “Good Living” (or “Sumak Kawsay”, in Quechua), through a blend of tradition-inspired shapes and graphical symbols.

Thanks to the use of KriskaDECOR aluminium curtains we get, on every side of the building, a unique composition.

The visitor becomes captivated by the façade’s great visual impact, which manages to frame the construction with a strong, chromatic emphasis that makes it stand out from the other pavilions.

In this case, the range of colours and sheens from the autochthonous Ecuadorian fabrics were sought.

This project is divided into four sides with an average height of 9 metres, reaching 10,5 metres at some points. The north face and the south face are 25,4 metres wide, while the east and the west are 15 metres each.

The lightness of the material has allowed for the creation of this metallic structure with enormous proportions.

Moreover, the system makes assembly much easier. Installing the curtains over the pavilion façade, which has a surface area of 765 m2, was carried out in just three days.

Modifications were made to fasten the curtains onto the proposed system, and also to increase resistance to inclement weather, creating a woven line that joined the different strips of chain, therefore getting similar responses to that of fabric. Source by ISABELYLUIS Comunicación. 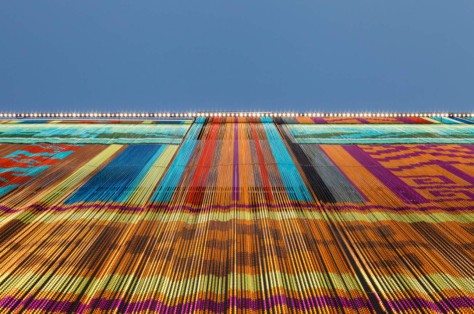