The design was to create a building that represents both past and future. In doing so the design of RSAA HAS formed a house that reflects on the current situation and the challenges Christianity is dealing with. To reach that goal, the main church has been separated from the additional functions and cluster those together in supporting buildings.

This community center and the church itself shall express different architectural languages to strengthen the desired effect. To emphasize the traditional roots of the church we orientate it directly east-west, following the historical layout. It is positioned in the center of the area seperates it into two plazas: The northern one is articulated as a smaller, more private space, while the southern one is more open and public.

The buildings of the community center form an open ring and shelter the arrangement from the outside. The opening allows the compound to have a strong connection to the lake, whilst blocking the noise of the street. To access the church visitors arrive from the east – either after parking their car or bicycle in the sunken parking lot, or by foot – and walk through a path that is cut through the landscape.

The way than seperates into two directions, either turning south towards the community center, or north to enter the main church building. The church’s volume and outside shape is following classic European church-architecture, showing its heritage. This shape however is formed in a unique way: A series of metal slices is erected vertically, each with 2cm thickness and 18cm gap.
Their outside shape is modeled to represent walls, roof and tower, whilst the inside is cut away to give space to a more free form.

The rounded interior follows harmonious curves that follow the traditional basilica concept, but does so in a modern interpretation, creating a cradling space on the inside to comfort the visitors. The layered construction of the skin of the building has two central effects: First of all it changes the appearance of the building depending on the angle at which it is looked at. From most points it closes up, but when looked at directly – for example when inside and looking up towards the skies – it opens up and lets the vision pass straight through.

The second effect is that the penetration of the light is different depending on the thickness of the wall – and that constantly changes due to the play between the rigid outside and fluent inside shape. The result creates an seemingly changing pattern that hints at the inside when seen from outside and vice versa. The supporting buildings are all clustered together in two groups, in the north the functions in close affliction to the church are located and it offers space for prayer, counsel and young mothers.

The upper floors are aimed at the churches administrations and have space for offices. The southern plaza is activated by the cafeteria, library and museum, as well as the small church. The upper floors are reserved for sunday rooms and other activities. The outside of these buildings is connected to the landscape, using the already existing hill, accentuated by the dugout earth of the foundations. The inside is defined by a calm limestone facade dominated by huge blocks that give way to different views. 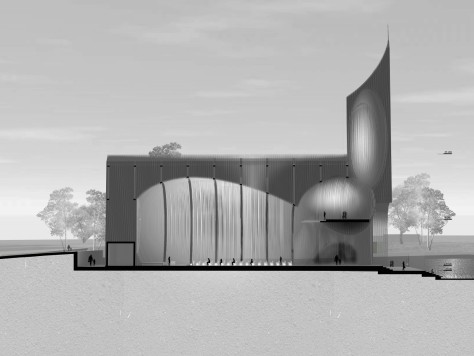 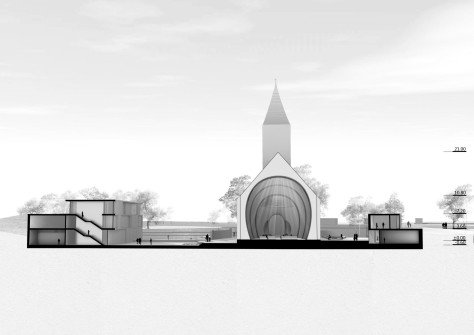 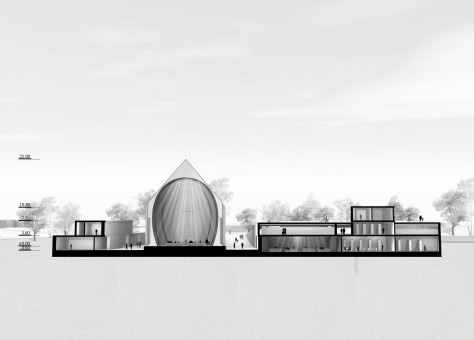