Gebr. de Nobel, Leiden’s new pop temple
A real student city has a flourishing pop scene, and Leiden is no exception. Already in 1969 there was the ‘Kreatief Sentrum’ [‘Creative Centre’] on Breestraat, later renamed as the Leids Vrijetijds Centrum. Thirty-five years later, the same organisation has a brand new building in the historic centre and a new name: Gebr. de Nobel, after the brothers who had a rags and scrap-metal business, well-known throughout Leiden, on precisely the same spot.

In order to strengthen its cultural profile and to make the city centre even more attractive, Leiden city council decided it needed a modern pop venue. Over the years, the city council bought a number of buildings in a block on the 19th century ring around the city centre, between the Lakenhal Museum and the Scheltema culture complex.

There were a number of charming houses in the block, but the real pearl was the 19th century, brick factory building on Marktsteeg, unusual for Leiden, originally built for making cement. Ector Hoogstad Architecten were asked to design a pop centre within the area of the block and to make use of as much of the monumental buildings as possible. With some improvisation, the designs resulted in a plan where old and new, atmosphere and functionality, complement each other perfectly.

Two new concert halls have been placed in the heart of the block – a main hall for an audience of 700 and a smaller one for 200 people. The halls are flanked on Marktsteeg by the historic factory building that now serves as entrance and foyer. The backstage programme has been housed on the side of Lange Scheistraat, partly in a newbuilt area and partly in an old house on Lammermarkt.

The theme of the design, for both the interior and the exterior, is the subtle combination of two opposites: old vs. new on the one hand, and crude vs. fine on the other. The size and scale of the new façades are in harmony with the rhythm of the houses which used to be there. The deep orange colour of the Corten steel used in the new façades matches the tints of the surrounding brickwork.

The higher parts of the building are clad in contrasting, mildly shiny stainless steel, providing dynamics in which the parts sometimes forcefully reflect light, and then again become invisible, matching the colour of the sky. The same materials are repeated on the inside: steel, brick, stone and wood. The entrance and foyer in the old factory building are dominated by coarse, old brick façades and distinctive wooden rafters. The new elements that have been added are made of the same materials, but more refined and polished.

A large, central staircase serves as a stage for small-scale, acoustic performances, so that the foyer can also serve as a performance space. The walls in the halls are also clad in combinations of steel and wood. The small hall has a club feel and will be used for dance acts and new bands. Ingenious acoustic measures have been applied throughout the whole complex to make sure that noise is contained within the halls. This is particularly important for the neighbours, whose living rooms and bed rooms are sometimes located less than twenty metres from the halls.

The highlight of the building is undoubtedly the main concert hall. Two U-shaped balconies give the hall a pleasant height and an exceptionally theatrical effect. The distance between the stage and the audience is extremely small, creating a sense of cosiness which is appreciated by both audience and artists. The fantastic acoustics of the first try-outs are very promising. Connoisseurs are already calling the hall one of the best in the Netherlands.

Leiden has add a pop temple to its venues. The grand opening will be taking place on 4th December, to be followed two days later by the first solo performance: Dutch singer-song writer Blaudzun will be performing to a sold-out hall on 6th December. Source by Ector Hoogstad Architecten. 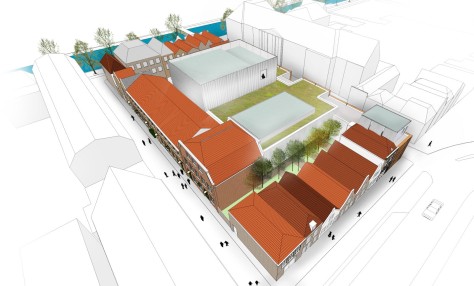